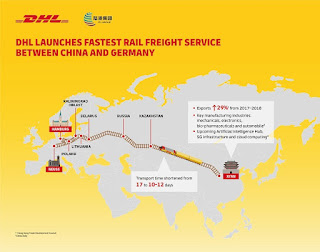 
The new express rail service is the first-of-its-kind in the market to break new ground in the speed and efficiency of China-Europe rail freight, shortening total transit time by travelling through the Mamonovo-Braniewo railway border between Russia and Poland.

"Xi'an is at the heart of the New Silk Road economic belt, taking on the same important role as it once did during the ancient route of Marco Polo's era," said Steve Huang, CEO, DHL Global Forwarding China. "A foreign investment and manufacturing hub that has seen exports increase in 2018 by 29% year-on-year, the city today is a thriving international center with high-quality production capabilities in pillar industries like mechanicals, electronics, bio-pharmaceuticals and automobile manufacturing. By boosting greater agility whilst offering the express rail service at reasonable costs, DHL Global Forwarding seeks to connect these fast-evolving industries to rising demand and market opportunities in Europe."

With trade between the two regions averaging €1 billion a day and slated to grow, China remains the European Union's second biggest trading partner, accounting for the region's biggest source of imports and its second-biggest source of exports. Equally, special economic zones in Greater Xi'an are attracting growing foreign investments as the city positions itself as a hub for Artificial Intelligence (AI), 5G infrastructure and cloud computing to enhance its manufacturing capabilities. Xi'an is home to over 100 enterprises specializing in AI, bringing in a total revenue of CN¥10 billion (€1.3 billion), while global and local companies have agreed to invest CN¥214 billion yuan (€27.5 billion) in the city's digital development.

"Over the past four months, we have been working closely with DHL to test and start this express line. Both teams have showed a tremendously high degree of enthusiasm and professionalism," said Qu Jinwei, General Manager, Xi'an International Inland Port Investment & Development Group Co. Ltd. "As next steps, we will strive to make this express rail freight a success. Using the development model of 'hub and industry integration', we will leverage this service to strengthen the collaboration between the region's manufacturing and trading sectors with international logistics. This would attract more industries to our region, fortifying their capabilities to gather resources from international supply chains and sharpening their competitive edges."

The new rail service takes an approximate 9,400-km route through Kazakhstan, Russia, Belarus, and Lithuania to Kaliningrad Oblast, a part of the Russian Federation on the south coast of the Baltic Sea, before entering the European Union via the Mamonovo-Braniewo crossing. The final stretch of the route crosses Poland into Germany to the port city of Hamburg, and to Neuss, an important logistics hub on the Rhine River across Düsseldorf. Traversing numerous countries, the fastest rail service between China and Germany was created with the support of China Railway, Belintertrans, RTSB Gmbh and UTLC -- Eurasian Rail Alliance.

The Xi'an-Germany express rail connection will offer customers real-time milestone visibility, using GPS tracking of shipments, via the iSee software platform -- giving shippers door-to-door visibility and insight into any shipping exceptions as soon as they occur.