The Xiqu Centre opens its doors in January 2019 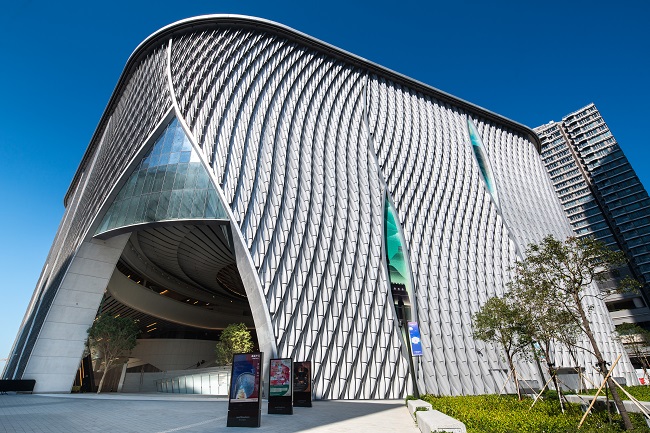 Lintasberitanews.net, Hong Kong - Media OutReach - The West Kowloon Cultural District Authority (WKCDA) announced the opening of the first landmark performing arts venue, the Xiqu Centre, at the West Kowloon Cultural District on 20 January 2019. Conveniently located at the junction of Canton Road and Austin Road West in Tsim Sha Tsui, the Xiqu Centre is designed to be a world-class platform for the promotion and development of Cantonese opera and other genres of xiqu (Chinese traditional theatre).

Its design, inspired by traditional Chinese lanterns, blends traditional and contemporary elements to reflect the evolving nature of the art form. Stepping through the main entrance, shaped to resemble parted stage curtains, visitors are led directly into a lively atrium with a raised podium and space for a variety of performances and exhibitions. The eight-storey building also houses the Grand Theatre, Tea House Theatre, Seminar Hall, eight studios, and a variety of retail, food and beverage and leisure facilities.

Dr Peter Lam, Chairman of the Hong Kong Tourism Board said, "Hong Kong offers a mix of new and old culture, and xiqu, which is on the UNESCO Representative List of the Intangible Cultural Heritage of Humanity, plays a pivotal role in heightening Hong Kong's destination charm. The opening of the Xiqu Centre will also mark a big leap forward in establishing Hong Kong as an international arts and cultural hub, expanding the city's appeal to a wider audience."

Following the opening ceremony, the WKCDA will present the Cantonese opera classic The Reincarnation of Red Plum, under the curation of Cantonese opera great Dr Pak Suet-sin. During the Lunar New Year, the Hong Kong Cantonese Opera Chamber of Commerce will host a Spring Festival Showcase. The three-month Opening Season will be concluded in March with a master selection of excerpts from award-winning artists.

At the Tea House Theatre, Cantonese Opera and Tea, curated by Cantonese opera virtuoso Law Ka-ying, will introduce the art form to audiences new to traditional Chinese theatre, offering an intimate viewing experience, with traditional tea and dim sum served during the performance.

Along with xiqu performances and the screening of iconic xiqu films, visitors can join a 60-minute guided tour to explore the facilities, learn about the architectural and design features, and discover fascinating facts about the rich history of the art of xiqu.