Indonesian Police Say One Man Killed in Jakarta was Civilian

ONE OF the eight men killed in a daring assault by Muslim activists in the heart of Indonesia's capital was a non military personnel and not one of the aircraft as first thought, police said Sunday.

The casualty, 43-year-old Sugito, was associated with contribution since he crossed the street to an activity police post by Dian Joni Kurniadi, one of four affirmed assailants, Jakarta police representative Col. Muhammad Iqbal said.

Sugito, who utilizes one name like numerous Indonesians, was one of four regular folks killed in Thursday's assaults by suicide aircraft and shooters who focused on a Starbucks bistro and the movement police post in clamoring focal Jakarta. More than 20 individuals were injured.

It was the first significant attack by aggressors in Indonesia since 2009. Police said the assailants were attached to the Islamic State bunch through Muhammad Bahrunnaim, an Indonesian battling with IS in Syria.

Iqbal told columnists that a careful police examination concerning Sugito's records finished up he was a normal inhabitant of West Java's Karawang city. 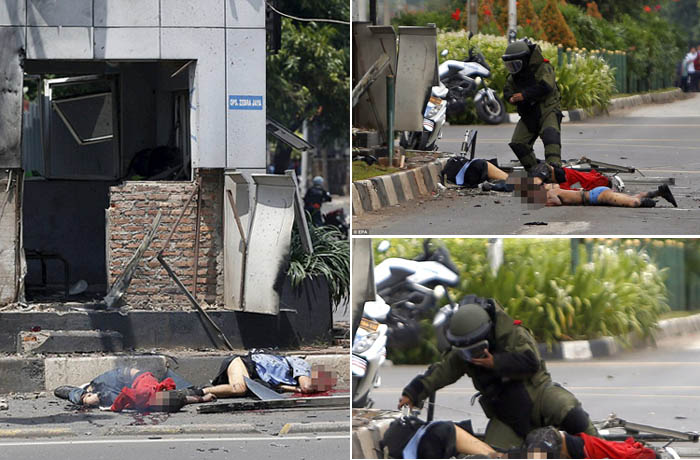 Police are as yet examining whether Kurniadi was the assailant who exploded himself at the movement police post, executing two regular citizens and severely harming a cop.

Two aggressors had known activist foundations: Afif Sunakin, who in 2010 was sentenced to seven years in prison for his contribution in activist preparing in Aceh territory, however was discharged early; and Muhammad Ali, who was sentenced in 2010 to five years in jail for victimizing a bank to fund radical exercises. Police recognized the fourth assailant as Ahmad Muhazan Saron, who exploded himself inside the Starbucks.

Police have captured 12 individuals associated with connections to Thursday assaults and are looking for others.